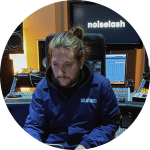 Spending too much time trying to figure out how to market your music instead of creating art?

This article is for you.

Warning: This is not your typical music marketing post. Be prepared for actionable advice.

✓ how to grow on streaming platforms without hours of manual work every single day
✓ how an artist we’ve worked with got 360,000 streams in a few months using Instagram ads
✓ why you should take advantage of TikTok ads right now
✓ why Spotify wants you to focus on growing followers
✓ how we effectively grow followers and streams with every artist we work with

Ready to learn how to grow your fanbase? Let’s do this!

Why You Should Always Advertise Your Music 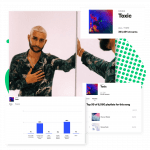 360,000 streams with ads for artist SaifLove 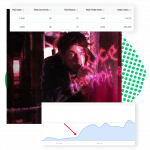 Why You Should Always Advertise Your Music

An artist writes a new song, goes in the studio to record and have the music mixed and mastered, and then a few weeks prior to the release date he/she announces it on the social medias.

The song comes out, the artist puts a few bucks behind it for a few weeks and that’s it, until the new song comes out. For the majority of artists, that’s what usually happens.

They are always on a roller coaster, their listeners and streams on Spotify always fluctuate, and they only get traction whenever they release new music.

Their growth is always tied to how much time they can spend on Instagram manually promoting their music or how often they can release music.

This is why you need to have a way to reach new fans every single day, even while you sleep.

The key component that Spotify uses to determine how relevant your music – other than collaborative filtering, natural language processing and how often you and raw audio track analysis – is the Spotify Popularity Index.

This 0-to-100 score ranks how popular an artist is relative to other artists on Spotify.

If Spotify sees your ranking growing, you’ll get placed in more playlists.

The Spotify Popularity Index ranking takes into account more than the aggregate number of streams on your songs, in fact, it values the frequency and recency of those streams.

Even Spotify itself agrees you should focus heavily on growing your followers:

“One of your biggest goals is to get a new listener to click that Follow button on your artist profile. Use your website and social media profiles to encourage your fans to follow you on Spotify. Once they do, they’ll see your new music on their personalized Release Radar playlist.”

So how do you promote your music and grow on Spotify while also having more time to work on your music?

The best way to do it in 2022 is to have strategic advertising campaigns in place that attracts new fans and followers without you having to do it manually or relying on the organic reach of your social media.

It’s how we generated millions of streams and views combined for dozens of emerging artists just during the last few months.

The results will blow your mind. Read on!

P.S. It has nothing to do with the ”boost post” or ”promote” button.

The most important contributing factor in running a successful advertising campaign, is being able to properly track what’s happening with your ads.

You don’t want to simply boost a post, insert your Spotify profile link and call it a day. This is called wasting money, and I don’t want you to do that.

Many artists make this mistake before working with us, and here is what happens when you run a simple Traffic campaign, or even worse, promote your music by simply boosting your posts:

X your ads are not optimized: the ”boost” option is so simple to use because it’s designed to spend money on advertising as easy as possible
X the targeting options are much more limited than the Business Ad Manager: you can’t reach your ideal fan properly
X you can only track how many people click your ad, not how many people actually load the destination page
X you can’t create proper retargeting audiences

“You can’t manage what you can’t measure.” – Peter Drucker

So, how do you make sure you are tracking correctly every dollar you are spending on getting your music out there?

You do it by using a landing page or deep-link with an embedded tracking Pixel in between your ads and your Spotify (or any other DSP) profile, that allows you to track the conversions a.k.a. how many people successfully load your Spotify profile from your ad).

It’s a link that tracks and measures people visiting any webpage or link with using an URL redirect and the Facebook Pixel.

It’s a piece of code that tracks and measures the performance of your ad campaign when it’s installed on your website or smart music links.

The tool we mainly use when we run advertising campaigns optimized for artists is a landing page with one or more links and we optimize for conversions. 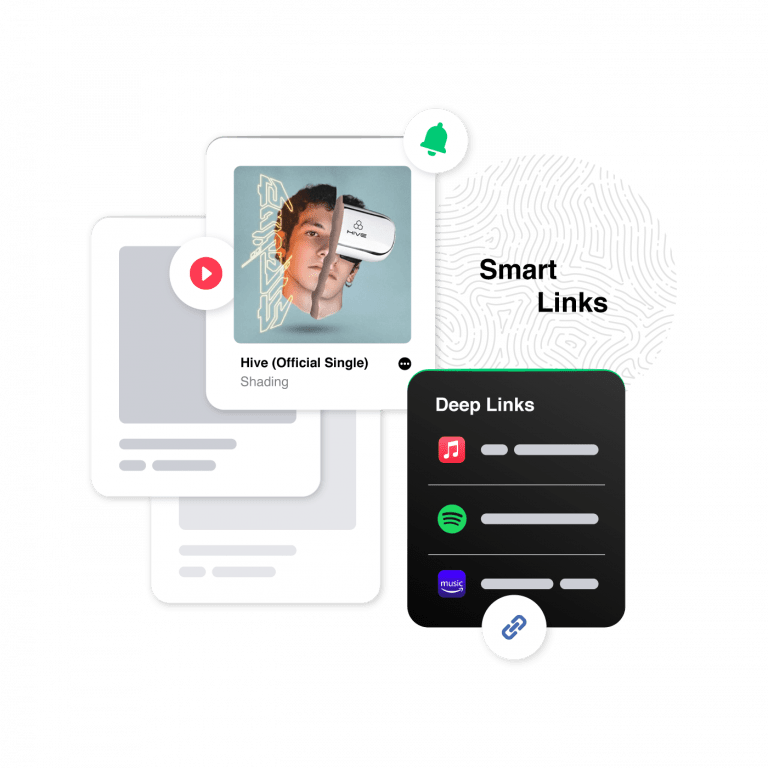 This way you know exactly how much it costs you to have people successfully loading your Spotify (or any other DSP) profile within a specific interest targeting, and you are also able to serve proper retargeting ads to the people who showed interest in your music. 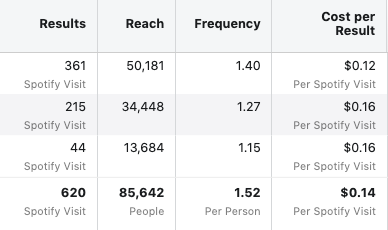 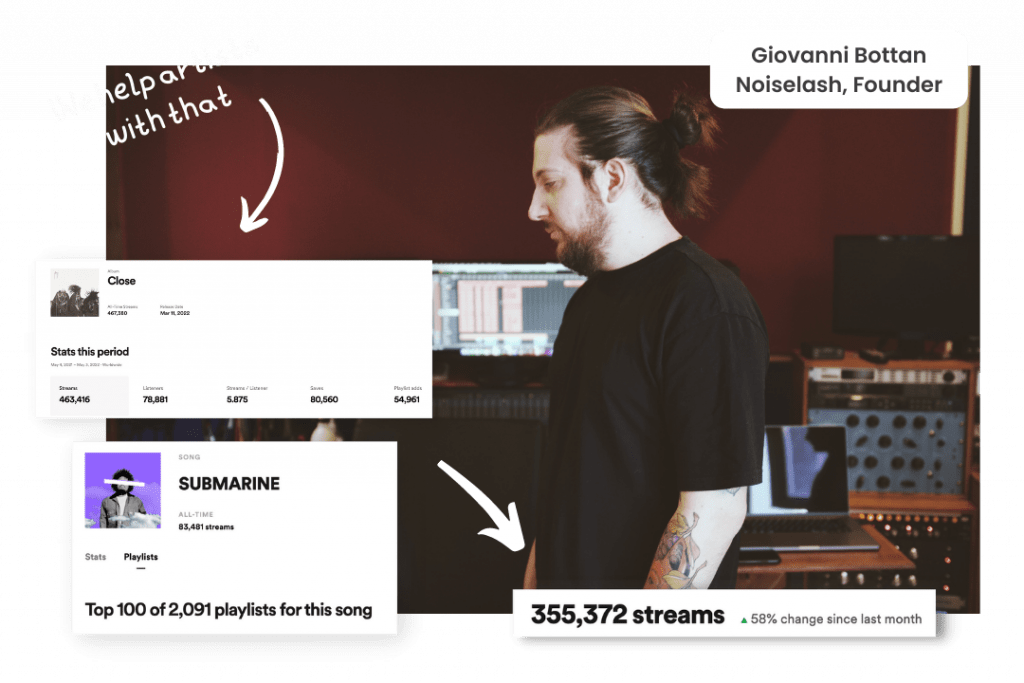 We started the campaign around the end of September and all we did was run conversion ad campaigns on Instagram Stories and Reels.

As we already mentioned, with conversion ads you are not just trying to get people to click on your ad, but in this case, you’re sending them to a landing page that has a Spotify link that takes them to the song, and you’re measuring exactly how much you’re paying for each person that successfully clicks on your ad, and goes to your Spotify to listen to your music.

Keep in mind, the most important aspect of a successful ad campaign is the video ad. If your video is boring, not engaging, and it doesn’t stop people from scrolling, they are not going to care and they’re not going to engage with you and your music.

This is why we tried to come up with video ads that, instead of the classic promo videos with the Spotify logo and a boring call to action, look way more organic and personal, and we tried to focus on the actual meaning of the song rather than just saying ‘hey new song out now’.

The campaign got 2086 conversions for 33 cents each, targeting the top English countries only.

You may be thinking, how could this artist possibly have gotten 360 thousand streams in a few months when you only got 2000 conversions?

If you were simply trying to get one-off streams, you would be doing it completely wrong.

The point of campaigns like this is to put your music in front of people that are going to become real fans, save your music on their libraries and listen to it over and over.

When your music is great, like in this case, and the right people see it, listen to it and save it, you’re likely going to trigger algorithmic playlists, another very important metric to measure when you run campaigns that send fans to Spotify.

As you can see, 95% of his streams are coming from people saving his music on their libraries and listening to it on repeat, and algorithmic playlists, more specifically: Discover Weekly and Release Radar.

There’s another thing that contributed to the success of this campaign, and it’s kind of a bonus tip:

This song features Caskey, an artist with a pretty decent following and traction on Spotify.

When Saif released the song he added Caskey as a primary artist instead of a featured artist.

This way the song also got pushed to Caskey’s fans via Release Radar and algorithmic playlists, with Saif obviously benefiting from that.

If you have the possibility to release a song with a bigger artist than you with a similar fanbase, definitely do it.

“I’ve been gaining new fans daily. You guys are awesome, thank you so much for all you’ve done!” – SaifLove

Some stats, from Disqo’s research, which polled nearly 17,000 TikTok users in North America between Sept. 20-21 :

If you ask us, these are great news, especially for you as an artist.

Recently we’ve been spending a lot of time testing TikTok ads for artists, and then comparing them to the same campaigns on Instagram, and well, results are interesting.

Not only we’re seeing a decrease in cost per conversion (how much it costs for someone to successfully go from the ad to listen on Spotify) but we’re also seeing a positive side effect: the account running the ads also grows substantially.

As you can see not only you can generate conversions at a very cheap rate, but people will also engage with your music and your brand, and are likely to stick with you for the long term.

Plus, we discovered a way to grow proper conversion campaigns, natively on the TikTok ad platform, that not only increase the conversion rate, but also gives you first party data that is crucial to understand the performance of your campaigns and how they’re affecting your streaming numbers.

Look at the following example for the band Next Time Mr Fox.

Interested to know how you can implement TikTok ads for your own music marketing?

Let’s have a chat!

Click the button below to open and download the full guide, so you won’t need to come back to this blog post when you’re ready to build your ad campaigns.

Save the full guide

Hey, before you go..

I’m sure that if you apply what you just learned in this guide, you will be able to see great results, but..

If you are that type of artist that prefers to partner with other cool human beings that spend tens of thousands of dollars every month, in the trenches, with dozens of different artists around many different genres..

Why don’t you click the button below to learn a bit more about what we do and see if we can help?

Either way, I hope you found this guide useful!

We use cookies to ensure that we give you the best experience on our website. If you continue to use this site we will assume that you are happy with it.Ok